Let's say you are a band and you want to keep scalpers from buying all of your tickets and reselling them at ridiculous prices.

By now we know what works: you sell tickets with assigned names on them, and check at the door that the name on the person's ID (or, alternatively, credit card) matches the name on the ticket. You can also offer a "+1 option" for bringing someone along, but they must be accompanied by the person who bought the tickets in the first place. No ID, no entrance.

By contrast, here's what doesn't work: 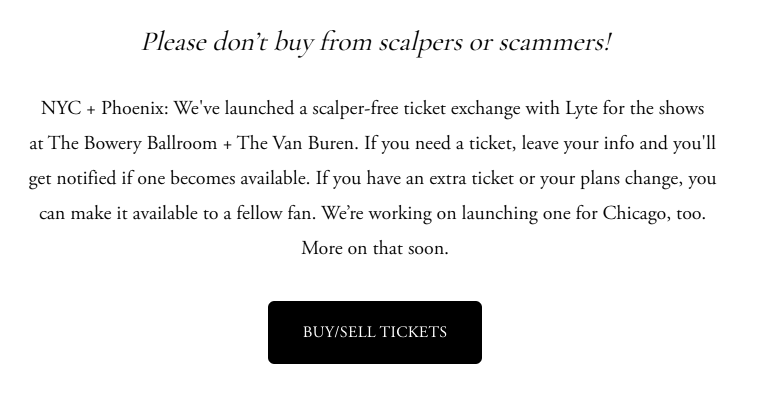 How do I know that it doesn't work? For starters, because all of the regular $40 tickets are sold out:

And because the only available tickets are those sold by scalpers at 10 times their value:

You know what I would do if I were a scalper? I would buy as many tickets as I could, and then I would also sign up for the exchange with as many fake addresses as possible. It doesn't matter that I can't use the exchanged tickets afterwards - as long as the supply is reduced, the value of the tickets I bought first will only go up. Since every overpriced ticket offsets the cost of the other 9 I got early, it all works out for me at the end.

Which brings me to my final point. I think there are three types of bands:

If you are a member of the first type of band I applaud you for standing up to your fans. And if you know someone who is in the second situation, feel free to forward them this post.

I could share some rough words with those who belong to the third group. But honestly, why bother? It's not like there's a shortage of good musicians. I'll go watch those instead.

April 2022 edit: John Oliver has a funny segment on this topic. You can watch it on YouTube